The British Prime Minister Boris Johnson, in his first address since recovering from the coronavirus, has said he won't throw away the progress made so far eat by easing the lockdown restrictions too soon. He said the tide was beginning to turn. Rolle Bosson reports.

Addressing the country outside 10 Downing Street, Boris Johnson's message was a mix of pep talk to the nation and balancing acts on the government's next steps. He insisted Britain was nearing the end of what he called the first phase of its fight against the virus and that if people stayed united, the country would emerge stronger than ever. But while he said the government understood business concerns and was looking at how and when to ease some of the current restrictions, he warned, everyone had to recognize a second peak in the virus risked economic disaster.

Some schools in China's biggest cities are reopening as normal life resumes following the coronavirus outbreak. Pupils back at school will still have to observe social distancing measures. Steven McDonald is in Beijing. 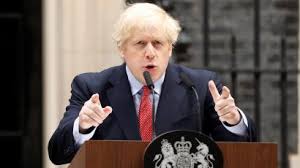 China is gradually steering itself back to some semblance of normality. In Beijing, Shanghai and Guangdong, final year high school students have resumed classes. They are amongst the last in the country to do so. The Chinese capital has retained some of China's most strict compulsory social distancing measures. Only residents are allowed inside housing estates. Restaurants must cap customer numbers and everybody entering the city has to do two weeks' quarantine on arrival. The communist party is preparing to host its most important annual political gathering here.

The chief executive of the European aircraft manufacturer Airbus has warned that the coronavirus pandemic has threatened the company's existence. He said that far-reaching measures would be needed. Our business correspondent Theo Leggett reports.

According to Guillaume Faury, the very survival of Airbus is in question. The company he's told staff is bleeding cash at an unprecedented speed and a 3rd of its business has disappeared almost overnight. Airlines around the world are fighting for survival and therefore unable to take delivery of the aircraft they've ordered either now or for the foreseeable future. Airbus has already cut back production dramatically and made use of government schemes to lay off workers temporarily in several countries. But according to Mr. Furry, the time has come to plan for more far-reaching measures and he says all options must be considered.

Russian lawmakers are reconsidering the country's ban on the encrypted messaging service Telegram, which has become a platform for government advice on coronavirus. Several government agencies are exploiting its popularity to spread their messages. Telegram has at least 200 million users worldwide, but was banned in Russia two years ago following its refusal to comply with a court order to hand over its encryption keys.

World news from the BBC.