Our story is called "The Diamond Lens. " It was written by Fitz-James O'Brien. Today we will hear the second and final part of the story. Here is Maurice Joyce with part two of "The Diamond Lens." When I was a child, someone gave me a microscope. I spent hours looking through that microscope, exploring Nature's tiny secrets. As I grew up, I became more interested in my microscope than in people. When I was twenty years old, my parents sent me to New York City to study medicine. I never went to any of my classes. Instead, I spent all my time, and a lot of my money, trying to build the perfect microscope. I wanted to make a powerful lens that would let me see even the smallest parts of life. But all my experiments failed. Then one day, I met a young man, who lived in the apartment above mine. Jules Simon told me about a woman who could speak to the dead. When I visited Madame Vulpes, she let me speak to the spirit of the man who invented the microscope. The spirit of Anton Leeuwenhoek told me how to make a perfect lens from a diamond of one hundred forty carats. But where could I find a diamond that big?

When I returned home, I went to Simon's apartment. He was surprised to see me and tried to hide a small object in his pocket. I wanted to discover what it was, so I brought two bottles of wine to his apartment. We began to drink. By the time we had finished the first bottle, Simon was very drunk. "Simon, I know you have a secret. Why don't you tell me about it?" Something in my voice must have made him feel safe. He made me promise to keep his secret. Then he took a small box from his pocket. When he opened it, I saw a large diamond shaped like a rose. A pure white light seemed to come from deep inside the diamond. Simon told me he had stolen the diamond from a man in South America. He said it weighed exactly one hundred forty carats. Excitement shook my body. I could not believe my luck. On the same evening that the spirit of Leeuwenhoek tells me the secret of the perfect lens, I find the diamond I need to create it. I decided to steal Simon's treasure. I sat across the table from him as he drank another glass of wine. I knew I could not simply steal the diamond. Simon would call the police. There was only one way to get the diamond. I had to kill Simon.

Everything I needed to murder Simon was right there in his apartment. A bottle full of sleeping powder was on a table near his bed. A long thin knife lay on the table. Simon was so busy looking at his diamond that I was able to put the drug in his glass quite easily. He fell asleep in fifteen minutes. I put his diamond in my pocket and carried Simon to the bed. I wanted to make the police think Simon had killed himself. I picked up Simon's long thin knife and stared down at him. I tried to imagine exactly how the knife would enter Simon's heart if he were holding the knife himself. I pushed the knife deep into his heart. I heard a sound come from his throat, like the bursting of a large bubble. His body moved and his right hand grabbed the handle of the knife. He must have died immediately. I washed our glasses and took the two wine bottles away with me. I left the lights on, closed the door and went back to my apartment. Simon's death was not discovered until three o'clock the next day. One of the neighbors knocked at his door and when there was no answer, she called the police. They discovered Simon's body on the bed. The police questioned everyone. But they did not learn the truth. The police finally decided Jules Simon had killed himself, and soon everyone forgot about him. I had committed the perfect crime. 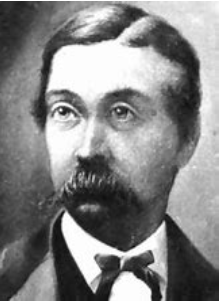 For three months after Simon's death, I worked day and night on my diamond lens. At last the lens was done. My hands shook as I put a drop of water on a piece of glass. Carefully, I added some oil to the water to prevent it from drying. I turned on a strong light under the glass and looked through the diamond lens. For a moment, I saw nothing in that drop of water. And then I saw a pure white light. Carefully, I moved the lens of my microscope closer to the drop of water. Slowly, the white light began to change. It began to form shapes. I could see clouds and wonderful trees and flowers. These plants were the most unusual colors: bright reds, greens, purples, as well as silver and gold. The branches of these trees moved slowly in a soft wind. Everywhere I looked, I could see fruits and flowers of a thousand different colors. "How strange," I thought, "that this beautiful place has no animal life in it." Then, I saw something moving slowly among the brightly-colored trees and bushes. The branches of a purple and silver bush were gently pushed aside. And, there, before my eye, stood the most beautiful woman I had ever seen! She was perfect: pink skin, large blue eyes and long golden hair that fell over her shoulders to her knees.

She stepped away from the rainbow-colored trees. Like a flower floating on water, she drifted through the air. Watching her move was like listening to the sound of tiny bells ringing in the wind. She went to the rainbow-colored trees and looked up at one of them. The tree moved one of its branches that was full of fruit. It lowered the branch to her, and she took one of the fruits. She turned it in her tiny hands and began to eat. How I wished I had the power to enter that bright light and float with her through those beautiful forests. Suddenly, I realized I had fallen in love with this tiny creature! I loved someone who would never love me back. Someone who is a prisoner in a drop of water. I ran out of the room, threw myself on my bed and cried until I fell asleep. Day after day, I returned to my microscope to watch her. I never left my apartment. I rarely even ate or slept. One day, as usual, I went to my microscope, ready to watch my love. She was there, but a terrible change had taken place. Her face had become thin, and she could hardly walk. The wonderful light in her golden hair and blue eyes was gone. At that moment, I would have given my soul to become as small as she and enter her world to help her.

What was causing her to be so sick? She seemed in great pain. I watched her for hours, helpless and alone with my breaking heart. She grew weaker and weaker. The forest also was changing. The trees were losing their wonderful colors. Suddenly, I realized I had not looked at the drop of water for several days. I had looked into it with the microscope, but not at it. As soon as I looked at the glass under the microscope, I understood the horrible truth. I had forgotten to add more oil to the drop of water to stop it from drying. The drop of water had disappeared. I rushed again to look through the lens. The rainbow forests were all gone. My love lay in a spot of weak light. Her pink body was dried and wrinkled. Her eyes were black as dust. Slowly she disappeared forever. I fainted and woke many hours later on pieces of my microscope. I had fallen on it when I fainted. My mind was as broken as the diamond lens. I crawled to my bed and withdrew from the world. I finally got better, months later. But all my money was gone. People now say I am crazy. They call me "Linley, the mad scientist." No one believes I spoke to the spirit of Leeuwenhoek. They laugh when I tell them how I killed Jules Simon and stole his diamond to make the perfect lens. They think I never saw that beautiful world in a drop of water. But I know the truth of the diamond lens. And now, so do you.